The Staggered Fire Add-On allows missiles, torpedoes, and mines to be fired one after the other in sequential order instead of all in one go.

If delay is needed between connected missiles, the staggered fire block comes in handy. You may not want the missiles to all hit the target in the same place or at the same time, as it can be a waste. It is better if missiles hit the target one by one as it allows missiles to re-target a new part of the vessel, or aim for an entirely new target if the original one was destroyed by a previous missile. It is also much more difficult to avoid the missiles if they are travelling separately, and missile interceptors and CIWS may not damage as many missiles with their area of effect. The Staggered fire add-on is highly recommended.

It must be attached to the Missile 6 Way Connector, or Missile Controller.

Q-menu allows you to set the staggering. 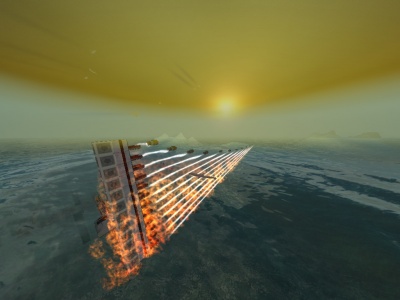 An example of missiles launched with a 0.1 delay.