Type 19 is an experimental ship, designed to test a variety of technology in the field, railguns, laser guided missiles, CIWS, drones, hydrofoils, trimaran hull, azipod, basically everything on this ship is Raporium's attempt at updating "classic" surface ships, in contrast to the radical thinkers at Selachii. Hopes were high from those members of the Admiralty that opposed Selachii's ideas for a modern navy, the Type 19 needed to pass any tests thrown at it as all previous types before had failed to meet sufficient benchmarks to be put into production. Skimming past most tests the Type 19 almost floundered when it was discovered that if its hydrofoils became fouled then it could quickly become swamped in rough seas. Despite this troubling flaw it was pushed through by the dissenting admiralty as they covered up the issue and instead hailing its other impressive abilities. One Technician was even dismissed for talking about the Sea trials to a reporter which raised some eyebrows, however the looming threat of the Scarlet dawn quickly drew attention away from the project. 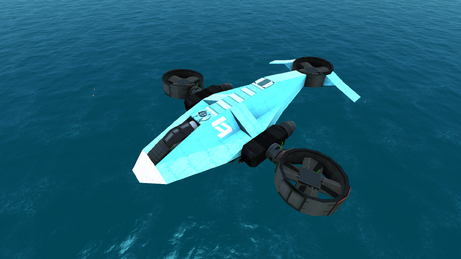